The terrain around crater Ernutet, as seen by Dawn. Warmer colours indicate the densest concentrations of organics. (Courtesy: NASA/JPL–Caltech/UCLA/ASI/INAF/MPS/DLR/IDA)

Organic compounds have been discovered on the surface of the dwarf-planet Ceres. The Visual and Infrared Spectrometer (VIR) on NASA's Dawn spacecraft detected the compounds while in orbit around the minor planet. The team investigating the data suggests that the organics were formed on Ceres, indicating the planet has a more complex chemical history than previously assumed.

The organics detected are aliphatic compounds – chain molecules primarily comprised of carbon and hydrogen atoms. They were found moving across the south-western floor of a 50 km-wide crater called Ernutet, as well as in patches to the crater's north-west. Organic compounds are volatile and would be easily destroyed by the intense heat of an asteroid impact. Also, their distribution across the surface does not seem to match with the ejecta from any specific crater.

The discovery was made by a team led by Maria Cristina De Sanctis of the National Institute of Astrophysics in Rome, during a survey of Ceres' surface between 60° north and 60° south. At higher latitudes the data was too noisy to be useful. "I've never seen anything like this anywhere in the solar system," De Sanctis told Physics World. "It's difficult to see how the organics could have come from an impactor."

If they were not delivered by an impactor, the organics must have somehow formed on Ceres itself. De Sanctis admits it is not certain whether they were made on the surface, or instead formed inside the dwarf planet before welling up from a water-rich layer below. Although all the raw materials for the organic compounds – carbon, hydrogen, nitrogen, phyllosilicates, water – are present on Ceres, "it is not very clear to me how the organics could have formed in situ,” says Thomas Prettyman of the Planetary Science Institute in Arizona. 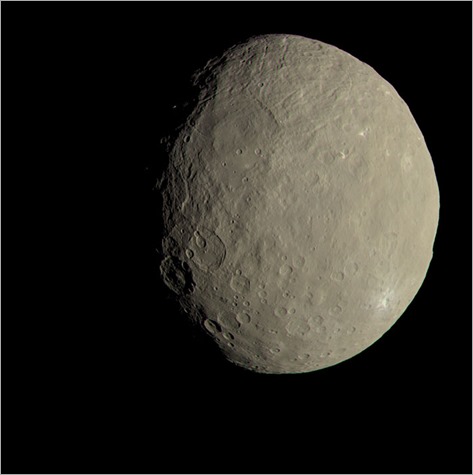 Knowing exactly which aliphatic compounds are present would help to solve this puzzle, but they all have similar infrared emission lines centred around 3.4 μm, making it difficult for VIR to distinguish between different compounds. "We know for sure that they are organics, but we can't say what kind of organics," says De Sanctis.

"There could be several different types together, or just one At the comet 67P Churyumov–Gerasimenko, the European Space Agency's Rosetta mission was able to distinguish between organics because "the identification of specific molecules is best done by mass spectroscopy", says ESA's Michael Küppers. Rosetta was able to fly through the gaseous hood of the comet, called the coma, and sample organics directly with its mass spectrometer. Dawn does not have this option around Ceres.

Instead, team-member and Dawn's principal investigator, Christopher Russell from the University of California, Los Angeles, says that "the community is talking about a lander, which should be much easier to accomplish than landing on a larger body like Mars, and we know where the interesting sites on Ceres are."

It's not the first time that organics have been found in the asteroid belt. Remote observations of several asteroids have hinted at the presence of organics, but it is unclear if they were deposited by impact or interplanetary dust. Meanwhile at the 92 km-wide Occator Crater on Ceres – home to bright patches of material known as "faculae" that are thought to be salt (possibly sodium carbonate) brought to the surface by water – there is an unidentified emission signature that could also be organics.

"What this discovery does is go beyond the wet-planet paradigm to Ceres being a possible incubator of more complex chemistry," says Russell. Although classified as a dwarf planet, Ceres is considered to be a protoplanet – the leftover hulk of a planet that never fully formed. Russell believes that the International Astronomical Union (IAU) misunderstood Ceres' nature when they promoted it to dwarf planet in 2006.

"The IAU chose to classify planetary status by size, which is flawed reasoning," he says. "Planetary designation should be judged on the interior properties instead. Ceres is a protoplanet or a small planet because of its internal chemistry. It did something besides just melting material, it made new [organic] material."

Although there is no suggestion of life on Ceres, aliphatic compounds ranging from methane and ethane to more complex compounds including kerite and asphaltite are thought to be essential building blocks of life's simplest biochemical mechanisms, making their discovery relevant to astrobiologists. "The presence of organics is a very important discovery," says Prettyman, before concluding that "it may be very challenging to determine their origins."