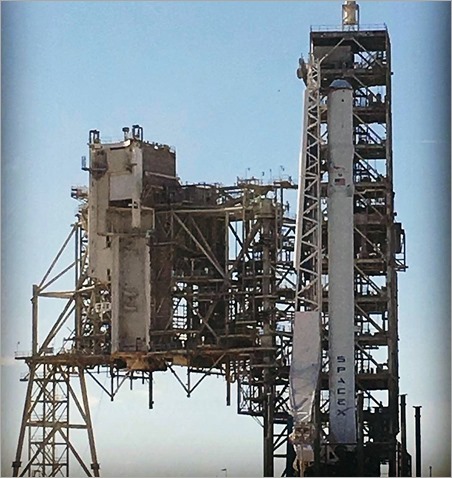 After more than five years, the historic launch pad has a rocket on it again. SpaceX's Falcon 9 rocket has gone vertical at U.S. space agency NASA's historic Launch Complex 39A (LC-39A) for the first time.

"Falcon 9 rocket now vertical at Cape Canaveral on launch complex 39-A. This is the same launch pad used by the Saturn V rocket that first took people to the moon in 1969. We are honoured to be allowed to use it," SpaceX founder and CEO Elon Musk posted on Instagram Friday, along with a photo of the Falcon 9 on LC-39A, which is part of NASA's Kennedy Space Center in Florida.

According to the California-based company, Falcon 9 will blast robotic Dragon cargo capsule, carrying cargo and science experiments toward the International Space Station.

"Targeting Feb. 18 for Dragon's next resupply mission to the @Space_Station - our 1st launch from LC-39A at @NASA's Kennedy Space Center," SpaceX posted on Twitter.

Over the years, NASA's Apollo moon missions and space shuttles lifted off from LC-39A. The last launch from the historic launch pad took place in July 2011, when the final flight of the Space Shuttle Atlantis lifted off. It was also the last-ever mission of NASA's entire space shuttle program.

In 2014, SpaceX signed a 20-year lease for LC-39A. After making some modifications to adapt it to the needs of SpaceX's Falcon 9 and Falcon Heavy rockets, the company is now ready to start using the historic Launchpad.

Originally, the U.S. private space firm relied on Launch Complex 40 (LC40) to support all of its Florida launches. But on Sept. 1, 2016, a Falcon 9 rocket exploded on the pad during pre-flight fuelling and the site was badly damaged.

SpaceX returned to launching rockets in January, four months after the explosion in last fall that destroyed a Falcon 9 and its payload, the 200 million U.S. dollars Amos-6 communications satellite.

On Jan. 14, the U.S. private space firm successfully delivered 10 satellites to low-Earth orbit and landed its Falcon 9 on a drone ship in the Pacific Ocean.